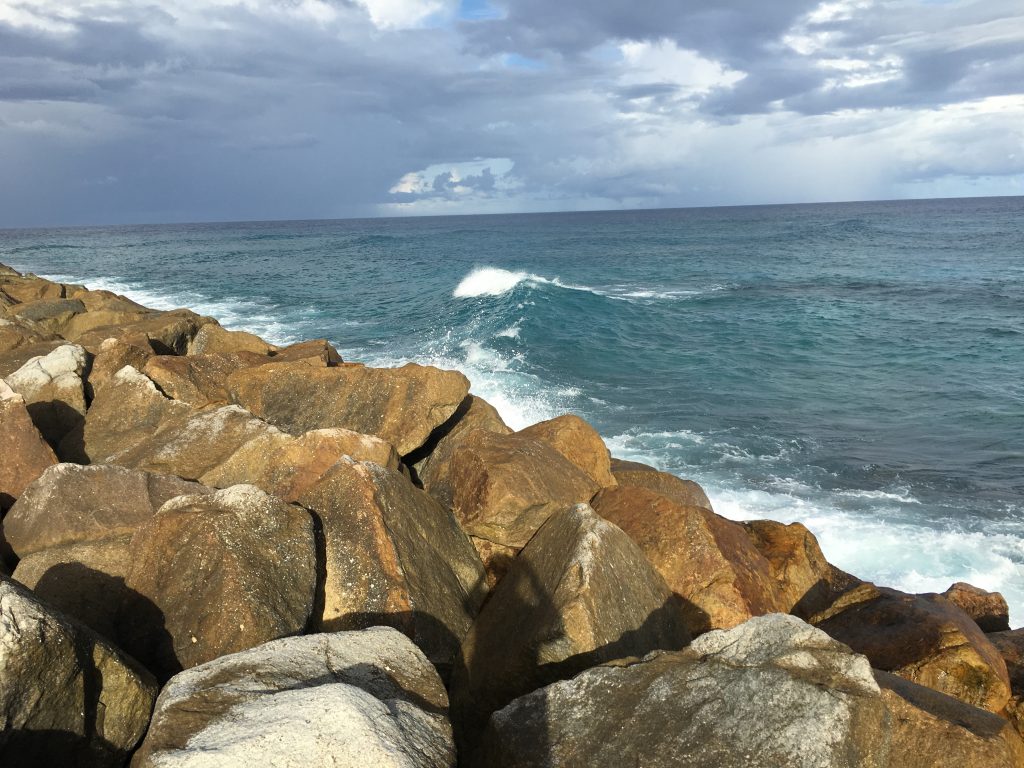 This is the area where you can see the wave movements when the wind that ignites the mysterious waves flutter above the surface of the surrounding sea here.

Fuvahmulah is a natural wonder. Its secrets and thrills are unending. One of the most thrilling phenomenon is the strange wave movements in the reef of the island’s southern end.

Wave movements are a mystery here. You can witness all kinds of wave movements in just one location – spilling, collapsing and surging. The wave movements also occur in all directions. It is a spectacle to see waves moving away from the shore and waves traveling parallel to the island. Normally wave movements do not vary in shoe of the islands. But this variation is a mystery.

The Waves of Calamity are mysterious phenomenon that occur every so often in the island. To my knowledge, i can recall more than 10 deaths in Fuvahmulah. People were drowned in the passage ways made to navigate to the island due to unpredictable and deadly waves. I have been a victim of these mysterious waves. I have fallen twice into caves of the rock boulders that are deployed to protect the harbor while i was indulging in fishing when unpredictable waves hit the rocks.

I had a deadly encounter in the northern passage way of the island when i fell into the opening of the passage. Allah almighty saved me. It was a miracle. I cannot forget the day. This passage has marked sorrowful memory in my mind. My best friend was drowned into this opening almost a decade ago. And disturbing memories of one of my cousins who lost his life at this passage remains in my soul. May Allah bless them with eternal peace.

Waves are actually energy passing through the water, causing it to move in a circular motion, much like a buoy or seabird floating on the surface. The winds cause waves on the surface of the ocean. The wind transfers some of its energy to the water, through friction between the air molecules and the water molecules. Stronger winds (like storm surges) cause larger waves. Factors that affect wave movements are wind, depth, fetch and duration according to fluid dynamics.

As the different types of ocean waves reach the shallow waters near the shore, they begin to interact with the ocean floor, causing the waves to slow down and increase in height. As the waves continue towards shore, they become less stable and eventually break.

There must be some reasons behind the variation in wave movements occurring here.

Therefore, it is obvious that the reef’s depth, matrix and other characteristics may vary immensely resulting in this natural phenomenon to occur. The tremendous ocean current beneath and above the surface could also be a factor for this mysterious wave movements. Perhaps there could be other hidden factors and forces behind this phenomenon. It would be a great idea to explore the hidden secrets of this reef for intellectual and ecological purposes. But it is an impossible dream as the whole country is plagued in poisonous politics.