Thrilling fishing method exclusively used in Fuvahmulah; battle of the master and the powerful sea creature. 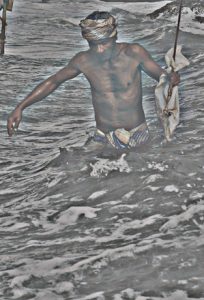 A special technique of fishing called Vevelhejeun is used by fishermen of Fuvahmula during the early days. This is a casting fishing method use to land some types of fish from open sea by casting the fishing rods at the reef crest of the island.

The most common type of fish that were landed by this method was trevally. But when a giant trevally (GT or Muda Handhi) was encountered by a master specialized in vevelhejehun, the thrill explodes. According to vevelhejahaameehun, people who are specialized in this method, the most powerful trevally they encounter is hudhuhelakanfa, largest and most powerful species of GT.

This method involves a bamboo pole (often 9 to 14 feet bamboo pole is used) and a fishing line. Normally the line is twice the length of the pole. The masters stay on the reef crest near open ocean. The bait used were dead flying fish. The pole would be casted and the dead fly fish was dragged along the surface to make splashes that would draw up the GT. Variations in casting would be carried out by the master.

Masters dragged the bait on the surface by maneuvering slow retrievals allowing the lure to sink for a moment before continuing causing big splashes. Casting were carried as close as possible to where waves were hitting.

Casting was hard work but the reward could be huge. Its physical, exciting and at the same time could be heart breaking as the master could loose the trophy. Aggressive surface strikes were one of the elements of excitement and triggering an adrenaline rush as nothing beat the sight of a rising fish in front of the masters when the predator swallowed the bait whole. The rush of excitement explodes as water explodes when the predator ferociously smashes the bait and the masters hooked on to the back of an express speed launch. 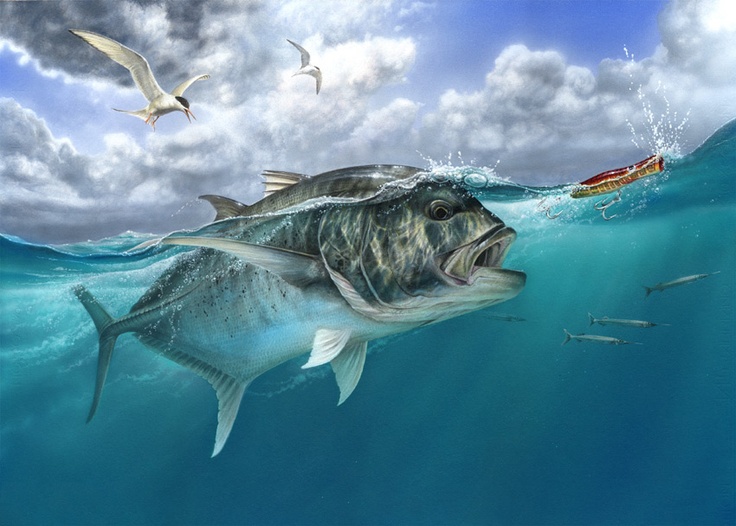 Then it was the instinct of masters to jump into the ocean. The appex predators swam away into deep ocean. The only way to beat them at their game was to stop their powerful run and it was not easy feat. Plenty of muscle would be able to stop these brutes.

Masters jump into the sea grasping the pole with one hand while placing the bottom edge of the pole between their under arm when these brutes drag them. They try to float on the surface as much as they could. Masters would start to thrash the predator by exerting force on the pole towards the surface.

GT caught using a modern day rodsThis maneuvering was extremely risky as the powerful creature could plunge the fisherman relatively deep into the ocean resulting in suffocation. For enthusiasts watching this excitement on the beach would be puzzled and a sense of fear also prevail in their mind. These predators are truly one of the toughest creatures swimming the seas. They are extremely versatile. So some people on the beach would stay alert to help the masters if anything went wrong.

As the GT heads towards deep sea, sometimes the masters were plunged 5 to 10 feet below the surface. But they would ascend in seconds by holding  the pole and thrashing the predator. This extreme fishing method would take 30 to 40 minutes, sometimes an hour to completely thrash the creature. After a ferocious battle between the master and the powerful creature, the masters would swim towards the reef flat with the trophy. According to elderly people, the greatest master was the late Hoonige kudhubei.

One thought on “Master’s fearless battle with sea beasts”