All Rights Reserved. The contents of this website site may not be copied, reproduced, republished, edited, downloaded, displayed, modified, transmitted, licensed, transferred, sold, distributed or uploaded in any way without my prior written permission. For permission requests, write to the author- yasirsalih@gmail.com.

Buddhism in the Maldives was the predominant religion at least until the 12th century CE. This is a story of how crows were depopulated in Fuvahmulah during the late 12th century. 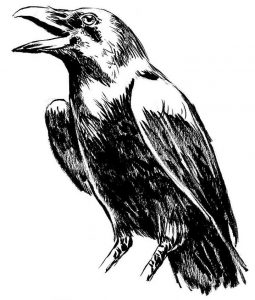 In ancient times, there was crow population in the Fuvahmulah, especially in Dhadimagu ward where one of the fresh water lakes – called kilhi- existed. Crows normally eat waste and insects. The crows that lived in Dhadimagu ward had a strange and disturbing behavior.

They happened to stay on trees near the kilhi. The crows mocked and cackled at herons when they missed their beak on Tilapias. They also mocked when two new birds met and lived together. They would stare at herons, egrets and other birds. Notifying birds with long beaks, short feathers and physical characters was their usual habit. These crows then informed other crows about what they see and mocked the birds..

The bird population living in the kilhi area were very frustrated and was thinking to retaliate to end the bad habit that was troubling them every day. But when compared to the bad crow population, due to the fewer number of birds in the kilhi area, they good birds were reluctant to make a plot.

The crows were shocked and terrified. And started flying away from the area. But it was too late. All the frigate birds attached and chased the crows. Within minutes most of the crows in the island were killed and the others fled the island. However some crows that were fleeing from the island were met by frigate birds that were hovering over the ocean. And they attacked the remaining crows and killed them. Thereafter, the crow population was wiped out.