Note: please note that this piece of writing is not to encourage or support any illegal substance of narcotics; the aim of this article is to reflect the tradition and culture. 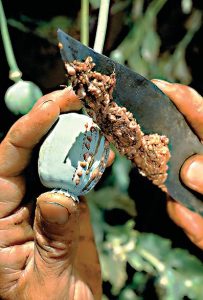 Today, our society is poisoned with various substances of narcotics. The problem is so deep-rooted that every Maldivian family has at least one member who is an addict. UNICEF statistics show that the average age for first time drug users is 12.

History was safe and free from this cancerous stigma. But today beyond the waving palms and turquoise pools, lurks the ugly problem of youth drug addiction. Maldives is existing as a moslem nation for generations. However there are periods when some narcotics substances were used without any legal barrier. One of the most popular narcotic substances used in this regard was Afihun or opium.

This is how Pyrad described what he witnessed in Maldives-, “most of them eat opium, or, as they call it, ‘afihun’, which intoxicates and stupefies them. Not withstanding this, they are all given to this vice without moderation, as well men as women, not to say more of their abominations.”

Afihun was used to achieve altered states of the mind by both men and women. It was widely used in  the country. Maldivian have a habit of chewing areca nut with beetle leaf. People often use afihun while having this blend. Irrespective of the ranks or age- mudhims, scholars, fishermen, men, women young and old- aifun was widespread among the Maldivians.

Nowadays people mock at some “lost” youngsters in the world of narcotics on the road and public places. During early days people who use afihun were subjected to the same conditions that some youths who are addicted to today’s narcotics.

Early days people used afihun to relax and draw away the mind from psychological state. Here is a true incident happened- when a person used afihun to take command of a vedi, vessel used to travel to neighboring courtiers, in a life threatening situation.