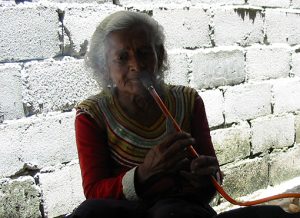 “Aiseifaane, mix a mound for goodugooda. Where is Aamineifaane- and others,” this is a typical call when a visitor enters the household that has a goodugooda or hookah.

Goodugooda was widely used in Fuvahmulah as it was a “partner” of all the smokers in the Maldives- for centuries. Goodugooda’s ability to produce pleasant, non-irritating smoke lead many to use it.

A goodugooda looks somewhat like a lamp base, with the glass vase at the bottom filled with water and the very top, called a “bowl,” filled with tobacco. When the tobacco heats up and the smoker sucks in through a connected hose, the tobacco smoke gets drawn down through a stem and pulled underwater before rising into an opening in the hose until it reaches the smoker’s mouth.

Goodugoodas produce a dense, flavorful smoke by heating moistened tobacco. In goodugooda the tobacco is heated, rather than burned. This was an “adorable” apparatus of Maldivian women. They have a craving for it.  Women gather in groups and share the pleasure of goodugooda. 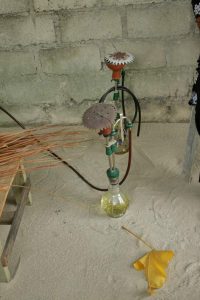 Preparation for smoking by this method involves making a special mixture – with various ingredients such as scents and even cologne (or the so called “fehi koalaavaataro”). The mound is made and laid on to the clay bowl. And a hookah foil is kept on the clay bowl. Then charcoal is put on the foil. It is then burnt.

Women enjoy the chilling effects as – “ba ba baa” is heard down from the glass vase,  sending the signal of pleasure as they pull the tip of the pipe by deflating their cheeks. They also deflate their cheeks several times to keep the charcoal burning. 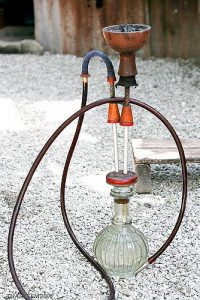 This adorable partner is everywhere they go. While playing cards, ovalhu, and having a friendly chat or to fabricate tales,  this adorable partner stays with them. Normally, 4 to 5 people will share the goodgooda. For every single pull of the pipe by the joyous ladies, their “partner” says – hm…BA BA BAAAAA as the thick smoke go off through the water. And their mind is altered for every pull of the pipe when the essence of the smoke flutters their senses.

Hookahs and other countries

Many of the various names of the hookah are of Indian, Turkish, Uzbek, Persian or Arab origin.

“Narghile” is from the Persian word nārgil, or “coconut”, and in Sanksrit nārikera, since the original nargile came from India and was made out of coconut shells.

“Shisha” is from the Persian word shishe, or “glass” (this is the correct literal translation, not bottle).

“Hashishe” is also an Arabic word for grass, which may have been another way of saying tobacco.

Hookah may stem from Arabic uqqa, meaning small box, pot, or jar. Both names refer to the original methods of constructing the smoke/water chamber part of the hookah.

“Narghile” is the name most commonly used in Turkey, Lebanon, Syria, Greece and Israel, though the initial “n” is often dropped in Arabic.

“Shisha” is more commonly seen in Egypt. In Iran it is called ghalyoun or ghalyan and in Pakistan it is referred to as huqqa.

The origins of the hookah pipe are argued over by many. The main countries claiming to be the father of the hookah are India, Iran, Turkey, Egypt and Syria. The likelihood is the pipe in its many forms probably made an appearance in more than one country independently and through ancient trade routes started to take shape into what we now consider a standard form. Most of the worlds pipes today are manufactured in Syria, Egypt and Turkey.