Look at the picture on the right side. The man climbing up the coconut tree is a Bangladeshi. He is collecting sap, acting as a raaveriya. This is a picture taken in November, 2015. 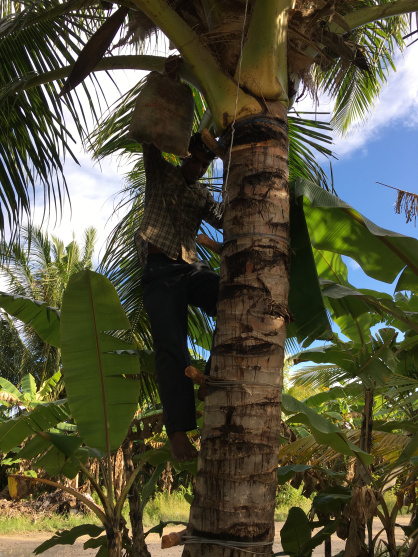 Toddy tapping is a symbol of Maldivian custom and tradition. In ancient days it was the backbone of livelihood. It contributed immensely to a prosperity of the inhabitants. But this custom has died away and is lost in the history. Toddy tapping or ‘ru’ erun’ is a skilled work passed from father to son. 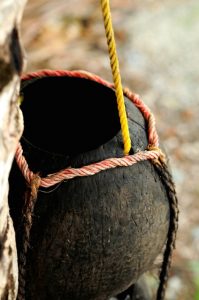 Galhi-tapper carries water in this container

How it is carried out

Raaveriya, tapper, first make the palm -a raa rui, making the ei (inflorescence) produce raa, sap. To achieve this, the raaveriun (plural of raaveriya) carefully chop the tip of the ei finely and wrap with leaf of screw pine. After the ei is set, the coconut tree is is referred as a raa rui.

When the ei is ready to ripen or produce raa, the raaveriya repeat the process where by chopping (around 5 mm) the tip of the ei and fasten a pot called bandi made up of coconut shells to the flower stump. The container is left to fill overnight.

Every day, raaveriya climb three times into each raa rui. In the morning they would climb up the palm to collect the sap and repeat the same procedure.

It is believed that the sap collected in the evening is most delicious. It is sweet. Sweetness differs according to the time of collection with the evening toddy being the sweetest.

It is tasty though it has a pungent odor.

A toddy tapper from Villingili assisted King Ali VI while he was engaged in fightingg the Portugese. Tappers from Dhonakulhi and Maroshi helped the great Mohamed Thakurufaan during the fighting of independance from the Portugese. They provided food and resources.

In the beginning of twentieth century, toddy played an important role in the economy of the Southern three atolls of the Maldives. These three atolls those days engaged in direct import/export trade with the outside world, especially Sri Lanka. One of the most famous export items was “bondi haluwa”.

Products from toddy were used not only for sale, but also as food on board during long sea journeys that sometimes lasted two to three months.

Toddy was used various ways.  When it is heated, it becomes Dhiyai hakuru. It is served with rice. It is also used an ingredient in deserts and sweet products.

If this syrup is further cooked under low-heat with a pinch of sugar and akiri for an extended period, it turns into a creamy-white paste called “Karo Hakuru.”

Toddy was also fermented and people derived vinegar, which is used in flavoring other food products and as a preservative to make local pickles or ‘assara’.

Toddy tapping is now slowly passing into history. The only tappers left are old men who practice the art simply out of habit formed over a life time. According to present day tappers, it is really hard work to continue the work.