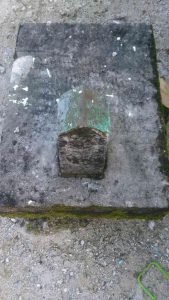 In ancient days, despite lack of resources and available technology, people of Fuvahmulah were bright to live a peaceful life. They followed ethical, religious and civilization principles. They lived a dignified life.

My uncle, Rafeeqbe, told me that in early days, they used to carry huge coconut palm trunks with the help of the water in the house reef (locally known as faromathi) during high tide. If a trunks or timber had to be transported from the ward of dhadimagu to funaadu ward, the trunks were dragged or pulled along the surface of the water and carried to the desired location. That is how they adapted their life according to the resources and agility.

Time is imperative in life. In ancient time, people used a piece of stone to measure time. Especially to call for prayer, to measure the time was important. People of Fuvahmulah also used sundials or vaguthubalaa gal. In the cemetery of the mosque, located in dhadimago fanno, an old sundial can be found. 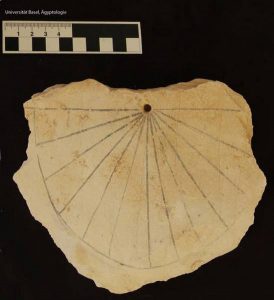 World’s oldest Sundial, from Egypts Valley of the Kings (.1500BC), source http://www.wikipedia.org

This sunidal is made from coral stone, curved in rectangular shape. A raised part made up of stone- gnomon- is fixed. At the tip of the gnomon is V-shaped. This vertical shaft, determines the altitude of the sun or the latitude of a position by measuring the length of its shadow cast at noon

In sundials, the gnomon is a piece of rod, stone or other sharp object, calculated and fixed in such a way that a sharp-edged shadow is thrown onto the dial-plate. This sharp edge of the shadow – either produced by the side or the tip of the gnomon – called style, is used to read the lines on the dial-plate. A dial-plate is often made of copper or bronze and is marked with lines that indicate time and date.

According to elderly people, some specially designed sundials were believed to forecast the weather. Vaguthubalaa gal are found within the compound of centuries of old Mosques in the Maldives. Prayers were called according to the measured time of the stone.

Some historians say that the vaguthubalaa gal were built on old Buddhist temple foundations. They say the sundials are in accordance with the temples’ orientations. But people are able to face Qibla, by the marked lines inside the mosque.