Prhaps one of the earliest examples of a successful commando raid can be found in the 12th century B.C. during the legendary siege of Troy. But every where in the world, people dare to carry out lionhearted struggles and undertakings. This piece of article is also about a truly fearless endeavors of brave and courageous inhabitants in the Maldives.

Ladies and gentlemen, this is all about traversing the island of Fuvahmulah, pounded by huge waves. For years, perhaps centuries, the people of Fuvahmulah risked their life to engage in this dangerous undertaking. Tragic incidents had happened, including loss of life. I can recall over 10 deaths in my life- that is during the past 30 years. May Allah bless their souls. All of these deaths have occurred in these deadly passageways. One encounter was an incident that a bokkora was capsized in the passageway of Dhadimagu Nere, the anchorage area in the northern area of the island.

“Row quickly. Quick!” This is the typical command given by the keulhu, or Captain of the bokkoraa or hafaali dhoni, vessels used for fishing and transporting goods, during the struggle to sweep from nere, passageways to getting to the island.

Fuvahmulah is surrounded by a tough and tremendous reef flat. In early days government created these passageway to traverse the island. Cruising through the island is dangerous, but it is also a stimulating action full of excitement and skill too. 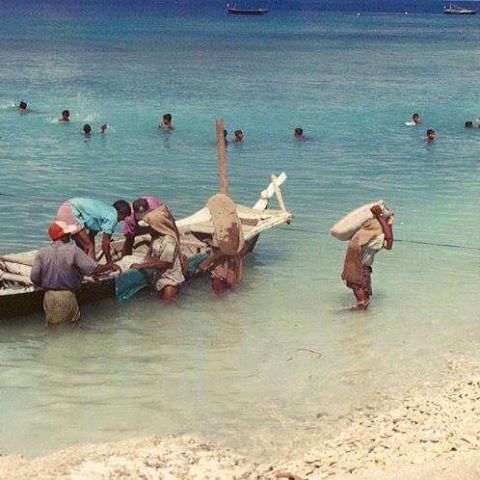 Unloading goods from Bokkuraa after a tough fight

Boats with consumer goods and passengers halt offshore of the island. The goods and people are disembarked using bokkoraas. When a boat arrives, the rowers, mostly skilled fishermen, drag the bokkoraa into the passageways of nere. Then the rowers get into the bokkoraa and slowly row towards the open sea.

This is Ahmed. He lead several undertaking for years

In a bokkura there are three rowers. The rower who rows with two oars, is called dhekedefaali jahaa meehaa. The other two rowers sitting in the middle of the bokkura is called bandofaali jahaameehun, each rower has only one oar.  The rowers have to be paired so that there is an oar on each side of the bokkoraa. 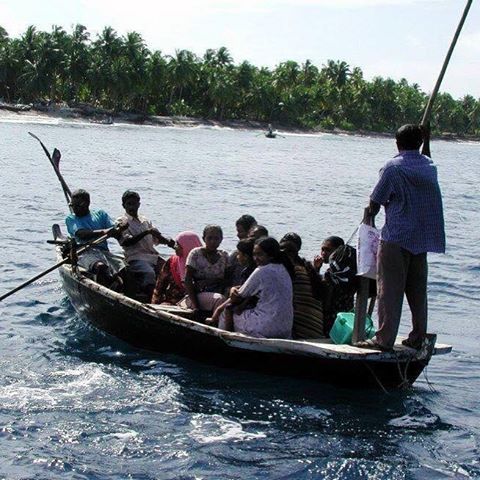 Disembarked passengers in the bokkora

The bokkora will be stationary in the middle of the nere as the spoon-like blade of the oars are twisted by the rowers and they push the stern of the oars away from their chest in a vertical-circular motion so that it generates backward thrust, keeping the vessel away from the point where the waves break. They will stay at this point with utmost concentration.

The waves can be seen generating  around 100 to 200 feet away from the bokkoraa. The keulhu will be cautious for plunging or spilling waves that might capsize the bokkoraa if the waves break into the vessel. So he will carefully observe the wave movements. When it is safe to start rowing, the keulhu directs them.

When they get a short span of time as the huge waves momentum eases around the vessel, the keulhu commands the daring crews to raw the bokkuraa. Normally they get 20 to 30 seconds of low intensity of waves if it the sea is rough or moderately rough. It is the daring moment. Thrill seekers are ready. The hearts of the people on the beach pound. You are never gonna experience an adrenaline rush this phenomenal. The experienced and daring crews face the risk.

The crews will twist the blade of the oars and start rowing as fast as they can. Simultaneously the keulhu also uses a stern to propel the vessel, by plunging it into the water and propels the bokkoraa forward and then again taking the stern out of the water and repeating the procedure till the bokkuraa sweeps from  the opening of the nere.

During this dangerous endeavor, several bokkoraa and dhoani had been capsized when huge waves break in to the vessels resulting in damages to vessels and goods. In our district, Ahamamad (Dheeframge) was the most daring “keulhu” who lead numerous undertakings for several years. If it was a rough day, the mission would be lead by him. He would not hesitate to wait for long time in the middle of the nere although huge waves pound repeatedly from the open sea. Ahmed is also one of the best fishermen in Fuvahmulah.