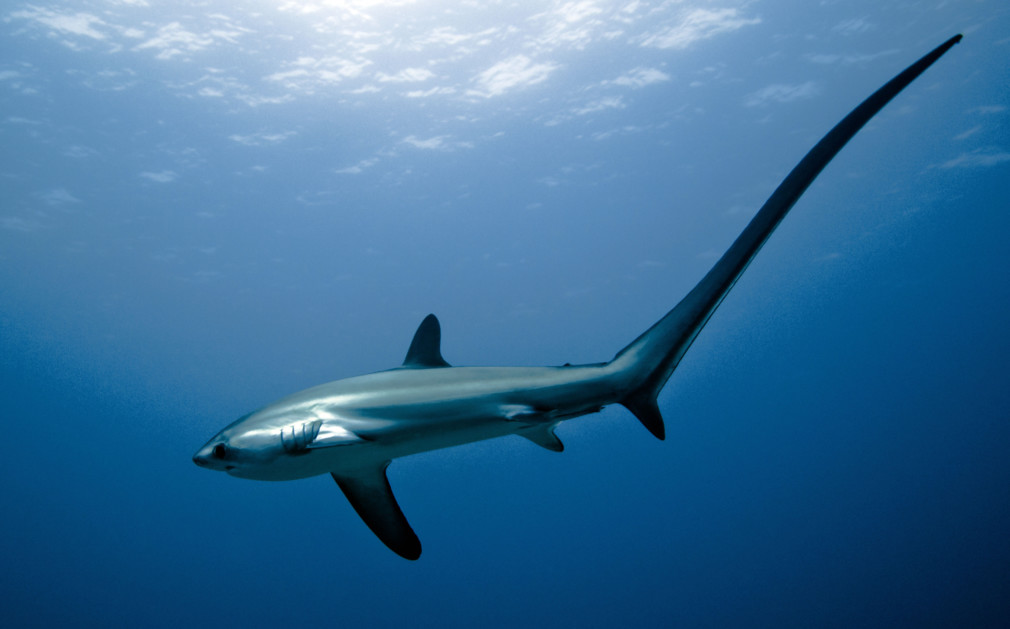 Fuvahmulah is unique in many ways. The stupendous deep sea around the island is home to some of the world’s rare and endangered species. Among them- the thrasher shark has found home around us. Ladies and gentlemen – the Indiana Johnes of the ocean. We call it nagul meyre. There are three different kinds of thresher sharks – common, pelagic, and bigeye threshers. While they all have unique qualities that set them apart, they share common traits that clearly set them apart from other sharks. All three thresher shark species have been listed as vulnerable to extinction by the World Conservation Union since 2007 (IUCN).

EYES
Common and pelagic threshers have moderate to small eyes. The bigeye thresher totally wins in the eye department. Their eyes are up to 4 inches lengthwise, which is slightly bigger than the diameter of a regulation-sized softball. In fact, they’re the largest eyes of any vertebrate outside of a few birds. Their eyes are shaped like an inverted pear, with their large pupils fixed at the top of each eye socket. This gives them the appearance of always looking upward, which is useful for spotting schools of fish swimming overhead.
HEAD
Common and pelagic threshers are similar in shape, but the pelagic has a narrower head and more elongated snout. Bigeye thresher sharks have a helmet-shaped head with a pair of unique indentations at the base; these extend from their last gill slit to just behind the eyes. Common and pelagic threshers have a short, pointed snout, while bigeye sharks have a longer snout.
TEETH
Thresher sharks have small blade-like teeth with smooth curved edges. There are about 40 teeth on each of their upper and lower jaws. Their teeth and jaws aren’t as strong as some other sharks, which is why they have come to rely so heavily on their tails to stun and kill prey.
COLOR
Thresher sharks are dark shades of brown and grey, appearing almost black. They have a white or lightly shaded underside, which can sometimes extend above their pectoral fins and onto the head. Common threshers have dark spots near their pelvic fin and caudal peduncle (the narrow part of a shark’s back end before the tail fin). Pelagic threshers are lighter in color with blue-gray dorsal sides, and can be identified by dark patches on their skin at base of their pectoral fins. Bigeye threshers are metallic purplish or brownish grey with light shading on their undersides.
DORSAL FIN
The thresher sharks’ first dorsal fin is located over or just ahead of its pelvic fins. The dorsal fin helps stabilize the shark while it’s swimming.
SKIN
The thresher shark’s skin is covered with hard, tooth-like scales called denticles. These reduce drag in the water and keep the skin clean and free from parasites. Common and pelagic threshers have small denticles that closely overlap, while bigeye threshers have a combination of large and small dermal denticles; the bigeye shark’s small denticles are spaced out among the larger ones.
BODY
Thresher sharks vary in size, with common thresher shark being the largest of the group, followed by the bigeye and finally the pelagic. All thresher sharks have tough strong bodies with long, whip-like tails. This unique feature has earned them the nickname “fox shark” or “sea fox.”
TAIL FIN
The most identifying feature of a thresher shark is of course, its tail. With an incredibly long upper lobe and short lower lobe, a thresher’s tail resembles a farmer’s sickle used to thresh grain. This tail can grow up to half the shark’s body length. The thresher’s tail is actually its greatest hunting tool. The shark will whip its tail back and forth to both corral and smack fish and other prey, stunning or even killing them outright.
Thresher sharks have to stay clean to survive. They often get sick from pea-sized parasites called copepods, which attach themselves to the shark’s gill filaments. A thresher shark with a gill filament infection can have trouble breathing, as these filaments help absorb oxygen from the water and deliver it through the shark’s bloodstream.

In order to rid themselves of these parasites, thresher sharks come to cleaning stations, like the one at the Monad Shoal – a sunken island near Malapascua in the Philippines. These cleaning stations are almost like car washes for sharks and other large fish.

Thresher sharks arrive at the cleaning station early in the morning. The small fish that live there, like the cleaner wrasse, feed on parasites and dead skin while the sharks cruise patiently. The wrasse can even go into the sharks’ mouths to clean extra food and bacteria from their teeth.

Strangely enough, the sharks and large fish hold off on eating the fish that are cleaning them. It’s as if there’s a truce between predator and prey at these cleaning stations, allowing the threshers to get clean and the wrasse to get breakfast!

Thresher sharks literally whip their meals into submission! These strange sharks feed on a variety of small schooling fish, but because they have weak jaws and relatively small teeth, they’ve learned to resort to a rather unusual method for catching their prey. Instead of using their mouths, threshers stun their prey by slapping them with their long, whip-like tails.

Bony fish make up 97 percent of a thresher shark’s diet. Popular meals include herring, sardines, menhaden, mackerel, as well as squid. Thresher sharks will even feed on seabirds that they’ve whacked with their tails.

Scientists are just starting to piece together how these sharks hunt. A thresher shark will speed up towards its prey and, when close, will rotate its pectoral fins down to stop short. The shark then brings its tail up over its body like a scorpion and strikes, using its tail like a whip. This mighty smack knocks the thresher shark’s prey unconscious or even kills it outright.

Humpback whales and sperm whales occasionally hunt like this, but the thresher shark is the only creature in the ocean that relies on this peculiar hunting technique almost exclusively.

If a thresher shark went to a family reunion, what a weird party it would be. Thresher sharks have a bizarre mix of relatives, all of which have very unique qualities among sharks.

Threshers are among 15 species that make up the mackerel shark order. Mackerel sharks include several “oddball” relatives like the eerie goblin shark with its long witchlike snout and ghoulish teeth; the basking shark with its comically enormous mouth, which it opens wide as it swims to feed on plankton; and the megamouth shark, which look like a Pac-Man from another planet with its enormous mouth and very short snout.

Thresher sharks, with their freakishly long tails, fit right in. But the mackerel shark order isn’t entirely made up of freaks and geeks – it includes a few more iconic-looking sharks like shortfin makos and great whites.

Compared to other mackerel sharks, thresher sharks have very few teeth. While the great white has 300 dagger-like teeth in its powerful jaws, threshers have relatively weak bites and only about 80 teeth.

The thresher shark shares a trait unique to some mackerel sharks, like the great white, mako and salmon shark: the ability to keep its body warm even in cold water. This allows the thresher shark to exploit habitats that other sharks can’t, which is a distinctive advantage in a competitive ocean environment.

For most sharks, the front end is the dangerous bit. Thresher sharks are the exception. They’re deadly at both ends, because they’ve managed to weaponise their tails.

The top halves of their scythe-like tail fins are so huge that they can be as long as the rest of the shark. For around a century, people have been saying that the threshers lash out at their prey with these distended fins—hence the name. But no one had ever seen them do so in the wild.