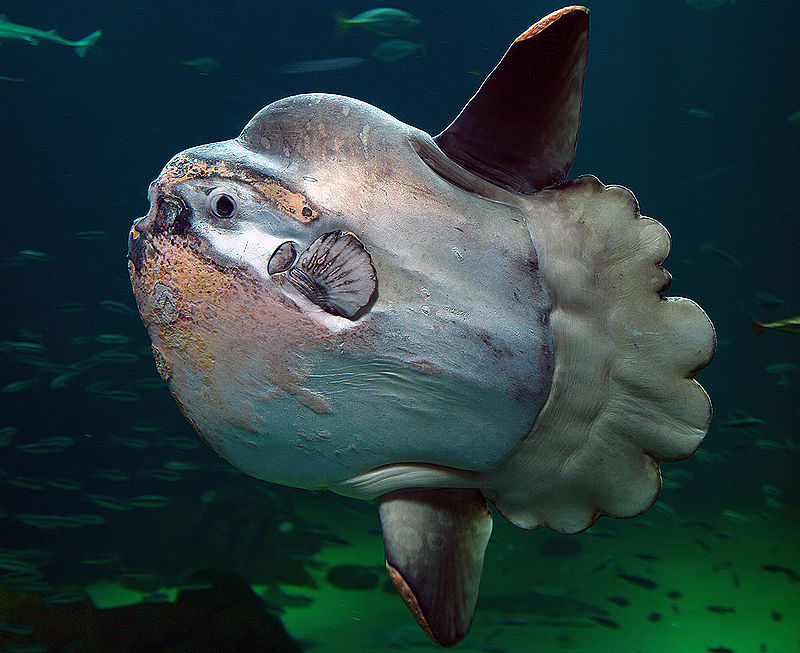 Another VVIP to our list – the mola mola is taking shelter in the sea of Fuvahmulah. If you want swim with this fish, come to Fuvahmulah. They will welcome you by swimming at various levels with you. The southern end of Fuvahmulah is a home for this special fish. They spend a great deal of their time in very deep water — they can swim down to 2,000 feet. This is the strangest fish on earth and it is the heaviest known bony fish in the world, weighting between 247 and 1,000 kg (545–2,205 lb). Its Latin name is Mola mola, means millstone. Recorded up to two tons, this gentle giant inhabits all tropical and temperate seas.

As gigantic as the ocean sunfish can be, it still seems like only half a fish.

Sunfish, or mola, develop their truncated, bullet-like shape because the back fin which they are born with simply never grows. Instead, it folds into itself as the enormous creature matures, creating a rounded rudder called a clavus. Mola in Latin means “millstone” and describes the ocean sunfish’s somewhat circular shape. They are a silvery color and have a rough skin texture.

The mola are the heaviest of all the bony fish, with large specimens reaching 14 feet (4.2 meters) vertically and 10 feet (3.1 meters) horizontally and weighing nearly 5,000 pounds (2,268 kilograms). Sharks and rays can be heavier, but they’re cartilaginous fish.

Mola are found in temperate and tropical oceans around the world. They are frequently seen basking in the sun near the surface and are often mistaken for sharks when their huge dorsal fins emerge above the water. Their teeth are fused into a beak-like structure, and they are unable to fully close their relatively small mouths.

Ocean sunfish can become so infested with skin parasites, they will often invite small fish or even birds to feast on the pesky critters. They will even breach the surface up to 10 feet (3 meters) in the air and land with a splash in an attempt to shake the parasites.

Their population is considered stable, though they frequently get snagged in drift gill nets and can suffocate on sea trash, like plastic bags, which resemble jellyfish.

Type: Fish
Diet: Omnivore
Average life span in captivity: Up to 10 years
Size: 11 ft (3.3 m)
Weight: Up to 5,000 lbs (2,250 kg)
Group name: School
Did you know? Ocean sunfish can become so infested with skin parasites, they will often invite small fish or even birds to feast on the pesky critters.
Size relative to a 6-ft (2-m) man: