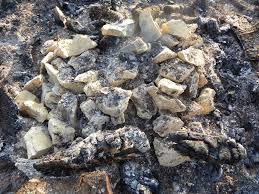 In early days, cement was not available for construction work. People of Fuvahmulah produced uva (u’a) or lime. Uvadhavaameehun, Lime-burners, collect akiri (pebbles) from the beach and carry it near the uva vado- the klin. Uva vado is made by digging the ground and was in the form of a crater. The klin’s depth is normally 4 to 8 feet; and 5 to 15 feet in its width. If more uva had to be produced, they used deeper and wider uva vado.

The uva vado had to be filled carefully, with precisely measured amounts and materials (akiri and dharo or woods in the desired proportion) – if the akiri did not bake at a high enough temperature for long enough, the akiri would not transform into uva and the work would be in vain.

Once the uva vado is filled, the dried wood, which is at the bottom of the uva vado, by that little door – will be ignited. And in turn, lit the fuel through the rest of the structure, setting the whole uva vado on fire. The burning process lasts two to three days. People stay near the uva vado to make sure no interruption happens. When the aikiri turns into anguru (red hot), water is poured into the burning akiri.

Limetstone burning in other countries

According to elderly people, water is poured to extinguish the fire at that stage so that the “perfect” uva will be produced.  When the fire dies down, the uva is collected and put into bags. The lime is then transferred to fallavaa, special place to hold lime, located in households. And used by raavaa meehun, masons.

Typically an uva vado took a day to load, two to three days to fire, two days to cool and a day to unload. The whole process continue for a week.