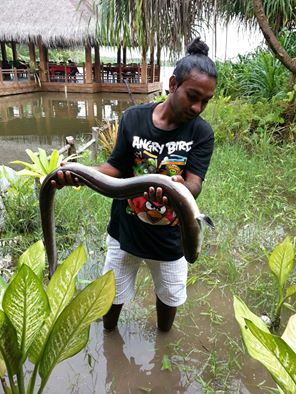 We rarely see koaven or freshwater eels that inhabit our fresh water lakes (kilhi). We spot them mostly in aaro, the passages (flood tunnels) that have been created in our island to pass water out of the island during periods of heavy rain fal 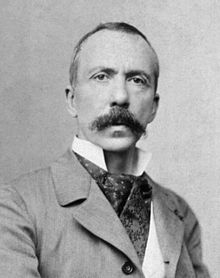 l or when the lakes (kilhi) overflow. People say that these eels don’t bite. But since early days there is a “myth” that these creatures have a “rasp” tongue that licks if it comes in contact with a human being. I searched the internet to clarify this and found no fact to support this this saying. But I was able to know that they have rasping teeth and are jawless.

I was also able to know that the French Scientist Charles Richet won his noble price in 1913, when he discovered anaphylaxis, life threatening allergic reaction, while he was researching the toxin derived from the blood serum of fresh water eels. We rarely see this species. The eels are seen during heavy flooding in taro fields, aaro and shallow waters.

These species are of the Anguillidae family of fishes that contains the freshwater eels. T

he 19 species and six subspecies in this family are all in genus Anguilla. They are catadromous, meaning they spend their lives in freshwater rivers, lakes, or estuaries, and return to the ocean to spawn. The young eel larvae, called leptocephali, live only in the ocean and consume small particles called marine snow.

They grow larger in size, and in their next growth stage, they are called glass eels. At this stage, they enter estuaries, and when they become pigmented, they are 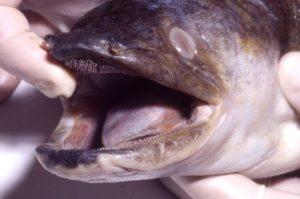 elvers. Elvers travel upstream in freshwater rivers, where they grow to adulthood. Some details of eel reproduction are as yet unknown, and the discovery of the spawning area of the American and European

eels in the Sargasso Sea is one of the more famous anecdotes in the history of ichthyology. The spawning areas of some other anguillid eels, such as the Japanese eel, and the giant mottled eel, were also discovered recently in the western North Pacific Ocean.

There are two main types of eel – the shortfin and the longfin. There are fewer eels today because of the loss of wetlands and historical commercial fishing practice.

They live mainly in rivers and inland lakes but can be found in almost all types of waters, usually well inland from the coast. They are legendary climbers and have made their way well inland in most river systems, even those with natural barriers. Elvers (young eels) swimming up river will climb waterfalls and even dams by leaving the water and wriggling over damp areas. It is not unheard of for an eel to climb a waterfall of up to 20 metres.

When eels begin life, they are a tiny one millimetre in length. During their life, they can grow up to two metres long. Compared with many other fish, eels are slow growing – a longfin may grow only between 15-25mm a year. They can also live for many years. Large longfins have been estimated to be at least 60 years old. The biggest eels are usually old females that have been slow to reach sexual maturity and, for reasons that are not yet understood, have not migrated to sea to breed. The biggest longfin eels reported have weighed as much as 40 kg.

In shape, eels are elongate, slender-bodied fishes, almost tubular. When they are small, they have relatively smooth heads but as they grow the head becomes bulbous, with a prominent muscular dome behind the eyes. They change shape again when they get ready to migrate to their breeding grounds. The head becomes much more slender and tapered, almost bullet-like and the eyes enlarge to up to twice their normal size.

Like all fish, eels have scales and fins. The longfin eel is so named because its top (dorsal) fin is longer than its bottom fin. While they have the appearance of being scaleless, tiny scales are embedded deeply within their thick, leathery skin. The eel’s skin is very sensitive to touch. This helps it to “see” in its watery environment. In colour, longfins are usually dark brown to grey black. Very occasionally, longfin eels found in the wild are partially or even wholly bright yellow in colour.

Eels eat “live” food. Small longfin eels living amongst the river gravels will feed on insect larvae, worms and water snails. When they get bigger, they begin to feed on fish. They will also eat fresh-water crayfish and even small birds like ducklings. During the day, eels are secretive, hiding under logs and boulders or under riverbanks. Occasionally, they may be seen out hunting for food but most of their hunting takes place at night. Eels hunt by smell rather than sight. Long fin eels have a well-developed sense of smell. They have tube nostrils that protrude from the front of their head, above their upper lip. They also have a very large mouth with rows of small, sharp, white teeth. The top teeth form an arrow shape on the roof of the eel’s mouth.