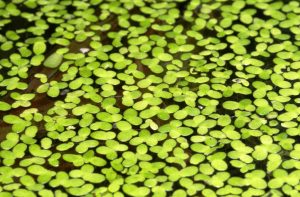 I thought of writing about a striking plant that inhabits our island. The backyard of my house is also covered with taro fields. And during heavy rain falls, I observe these plants. But when I was a small boy, I had no knowledge of this plant that are so baffling, but phenomenal for me. People claim and mention some names of individuals who brought this plant to our island. However during the early days of our life, we had no information about these plants. While trying to include unique things in my island, i thought to add this to my site.
When the taro (ala) fields in our island are covered with water, a bright green layer can be observed on the surface. It appears like green carpets floating on the surface. The appearance and the texture are amazing. It scatters as a rug woven using needle felts knotted by hand. We call it “fah kudhu javaahiru” – “tiny gem leaves.”  Some people call “fah kudhu jawaahiru.” Jawaahiru means gem or diamond. When we hike in the taro fields, it sticks on our legs. The weeds are actually called duckweeds. It is known as ‘water lentils’ in France. The surface of the water exhibits a striking view when these weeds occupy the taro fields. If we throw a stone or an object into the taro fields, a ripple wave sends the weeds away from the point where the object landed, creating a circular area without the weeds. But withing seconds the weeds model again into a flattened texture. 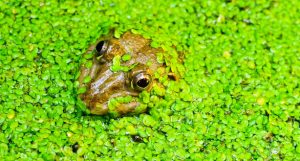 Duckweeds are the smallest of the flowering plants, which consist of tiny, green, rounded, leaflike bodies (fronds) that float on the water’s surface. Each duckweed plant (genus Lemna) is a green, leaflike circular or oval frond less than 1/4 inch across, each bearing a single short, hairlike root that dangles into the water. Giant duckweeds grow in clusters of 1-3, with 2-20 roots per frond.

Duckweed belongs to the Lemnaceae family, a group of the smallest flowering plants with no leaves or stems, though some have roots. All duckweed varieties can produce small flowers, but they rarely do. Each frond can be nearly 3/8 inch across. Several duckweed plants can fit easily on a fingertip. They occur singly or connected in groups. They usually reproduce by budding, but do (rarely) produce tiny, simple, male and female flowers.

They are typically found floating in thick mats of homogeneous populations in quiet streams or ponds containing high levels of organic matter. Another amazing feature of these plants is that they can double their mass in less than two days under ideal conditions of nutrient availability, sunlight and temperature. To put this into perspective, a small patch of duckweed could theoretically cover the entire surface of a 0.5-hectare pond in less than 50 days! By providing food and cover for many types of aquatic wildlife, duckweed contributes to fishing, frog and duck hunting, and more. In old, nutrient-rich ponds, and those contaminated with feedlot runoff or sewage, duckweed can spread quickly, cover the surface, and become a nuisance.