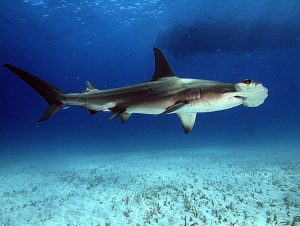 The underwater life of Fuvahmulah is a scene of utter beauty and home for unique species of fish. Hammerhead shark, locally known as beedibol meyre, enjoys the unique geographical characteristics of the ocean surrounding the island. We call it beedibol meyere, as its unusual head is like a cushion and base of coconut leaf. This fish is among the VVIP creatures that guard the sea of our extraordinary island.

This amazing piece of anatomy built to maximize the fish’s ability to find its favorite meal: stingrays. A hammerhead shark uses its wide head to trap stingrays by pinning them to the seafloor. The shark’s eye placement, on each end of its very wide head, allows it to scan more area more quickly than other sharks can. The hammerhead also has special sensors across its head that helps it scan for food in the ocean. Living creatures’ bodies give off electrical signals, which are picked up by sensors on the prowling hammerhead.

The shark hunts alone, and can find stingrays that hide under the sand on the seafloor. Hammerheads also eat bony fishes, crabs, squid, lobsters, and other sea creatures. The upper sides of these fish are grayish-brown or olive-green and they have white bellies. They have very impressive triangular, serrated teeth—like the edge of a saw’s blade. Hammerheads’ mouths are on the underside of their heads.

Unlike many fish, hammerheads do not lay eggs. A female gives birth to live young. One litter can range from six to about 50 pups. When a hammerhead pup is born, its head is more rounded than its parents’.

There have been very few recorded attacks on people by the great hammerhead.

Hammerhead sharks are consummate predators that use their oddly shaped heads to improve their ability to find prey. Their wide-set eyes give them a better visual range than most other sharks. And by spreading their highly specialized sensory organs over their wide, mallet-shaped head, they can more thoroughly scan the ocean for food.

The great hammerhead is the largest of the nine identified species of this shark. It can grow up to 20 feet (6 meters) in length and weigh up to 1,000 pounds (450 kg), although smaller sizes are more common.

Found in temperate and tropical waters worldwide, far offshore and near shorelines, hammerheads are often seen in mass summer migrations seeking cooler water. They are gray-brown to olive-green on top with off-white undersides, and they have heavily serrated, triangular teeth. Their extra-tall, pointed dorsal fins are easily identifiable.

Most hammerhead species are fairly small and are considered harmless to humans. However, the great hammerhead’s enormous size and fierceness make it potentially dangerous, though few attacks have been recorded.

One thought on “Beedi bol meyre- the hammerhead shark”