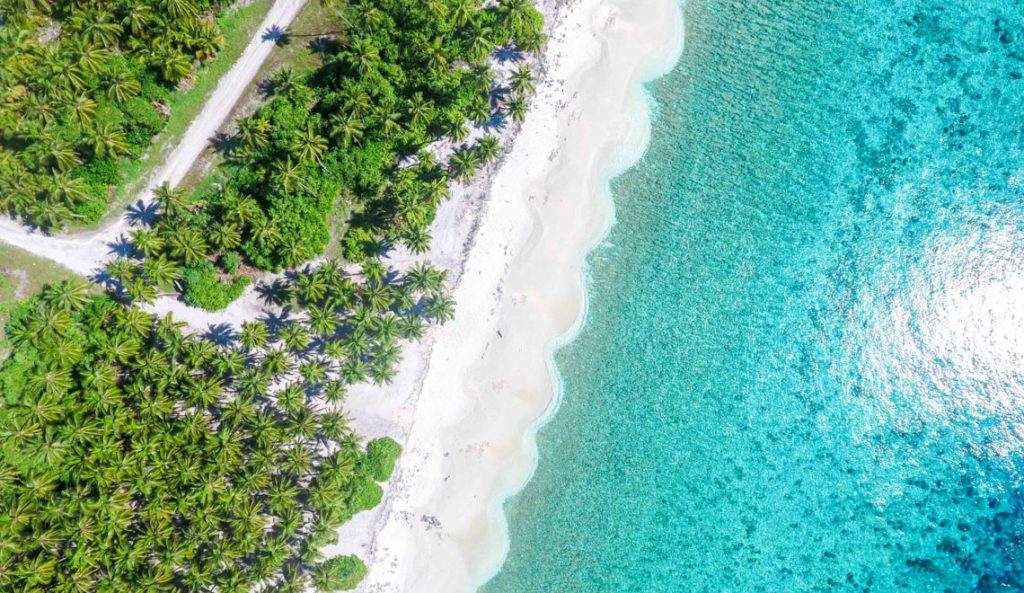 I was baffled and amazed to see the picture uploaded by Nasih Thaath in Fuvahmulah online that unfolds the mysterious beach formation in the northern beach -thoondu- of our island. People say everything about Fuvahmulah is unique and mysterious. That i s true. Thoondu is a phenomenal place.

It is the most breathtaking and mysterious beach in the Maldivian archipelago. Twenty years ago, the white sandy beach was so vast that it stretched hundreds of meters across  the northern tip of our island, creating natural phenomenon that puzzled and attracted thousands of people. The edge of the sand adjoining the beach was so slanted that we used the base of the coconut leaf (beedi) to glide down the sand. It was skiing. Hold on! Lets look at the mysterious beach formation in Thaath’s picture. Some pictures similar to these have gone viral on the internet in other parts of  the world.

These formations are called BEACH CUSPS. This phenomena is not fully understood. Scientists have been carrying out researches for 50 years and they are able to conclude just two theories.

They ‘believe’ two causes for this formation. The ‘standing edge theory’ claims that the interaction between the normal waves approaching the shore and the edge waves gives rise to regularly spaced-points of different wave intensity. Meanwhile the self-organization theory explains that beach cusps are products of interactions among wave, currents, as well as sand over time that result feedback loop.

But these occurrences happen in shoreline made up of various grades of sediment in an arc pattern. The horns are made up of coarser materials and the embayment contains all the finer grain sediment. They can be found all over the world and are most noticeable on shorelines with coarser sediment such as pebble beaches. Thoondu is a place where you can observe one of the most mysterious sediments- called “thoondu veyli” or pebbles. These shining white pebbles resemble gems. However, they can occur with sediment of any size. They nearly always occur in a regular pattern with cusps of equal size and spacing appearing along stretches of the shoreline. These cusps are most often a few metres long. However, they may reach 60 m (200 ft) across.

Once cusps have been created they are a self-sustaining formation. This is because when an oncoming wave hits the horn of a beach cusp, it is split and forced into two directions. The crashing of the wave into the cusps slows its velocity, causing coarser sediment to fall out of suspension and be deposited on the horns. The waves then flow along the embayments (picking up finer sediment) and run into one another in the middle. After this collision these waves attempt to flow back out to sea where they are met by incoming waves. Therefore, once the cusp is established, coarser sediment is constantly being deposited on the horn and finer sediment is being eroded away from the embayments. This process causes the horns and embayments to at least maintain their size, if not grow larger.

According to researches most of these formations do not last long. It forms in a quick pace of time and vanishes quickly.

We have witnessed natural occurrences such as bissaaveli – formation of huge water pools in naturally engraved area of the sand- formation, and the “moving” of the sand across the northern end, and we have been gifted with the pebbles of gems in the beach.

Beach cusp is another phenomena the nature has bestowed upon us. This is the first time that we have witnessed this occurrence. But perhaps it has occurred in the past. Who knows! Nature’s tranquility and perfection have eluded us from these occurrences. Man is ignorant to judge nature. Its so mighty and complex. Natural phenomenon are greatest signs of god’s creation and existence.

One thought on “Mysterious “beach cusps” observed in Fuvahmulah”