*This story is protected by the copyright law (Law no: 23/2010. Copy right aa e aa gulhey ehen haggu thakuge gaanoon) of the republic of Maldives. All Rights Reserved. The contents of this website site may not be copied, reproduced, republished, edited, downloaded, displayed, modified, transmitted, licensed, transferred, sold, distributed or uploaded in any way without my prior written permission. For permission requests, write to the author- yasirsalih@gmail.com. 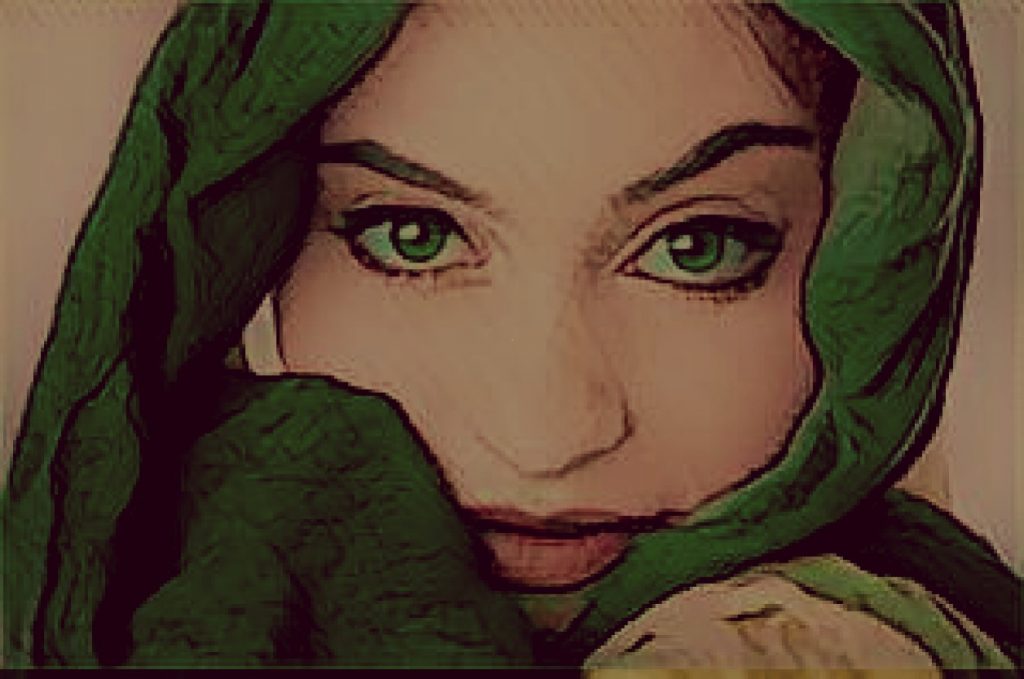 Anciently, a beautiful green-eyed woman named Sitheefaane lived in Fuvahmulah. She was so beautiful that her husband Hassan Kalo lived with her in a small underground shelter in the southern part of Fuvahmulah, to shield her from prying eyes and jealousy. They had a son, Futhu. The family lived very happily. Many women and men were jealous of Sitheefaane’s charming beauty and the family’s content life.

Ibra’s aide advised him that there was no possibility to separate them. They loved each other deeply. But the aide told his master that sihuru could be performed to destroy Hasan Kalo and then fanditha could be performed on Sitheefaane to charm her. This advice was a consolation for Bondo Ibra. And he decided to perform a powerful sihuru to destroy Hassan Kalo. In ancient times, it was believed that people with green eyes could not easily be possessed or incarnated by sihuru. So a special spells and sihuru should be carried out to possess people with green eyes.

One bizarre night, Ibra and his aide went to Arufanne beach and caught a grouper fish needed for carrying out the evil plot. When groupers were used with sihuru curses, it was believed to inflict human beings with illness that ultimately lead to rapid demise of the person subjected. The magicians put the grouper into a small vase that was half-filled with salt water and oil made from a liver of a young boy who was buried in the cemetery of Dhadimago ward the previous night. They hid in the thick vegetation to carry out the destructive sihuru. As the two evil men walked through the thick bushes, eerie insects retreated in fear of the weird men. The lonely family of Hassan Kalo had not encountered a wicked plot in their entire life. But in that night, Sitheefaane told her husband that she felt something strange about to happen to them. The puzzled Hasan Kalo insisted that there was no reason to be concerned.

Ibra started performing sihuru. They waited till the grouper gulped the liquid in the vase and was affected by the liquid. When the grouper was affected, Ibra took a sharpened knife and hit in the eye of the grouper while it was moving in the vase. The instance the knife was unleashed on to the fish, his aide laughed in mockery and joy. Ibra performed a deadly sihuru that caused Hasankalo to fall ill.

Far away on the southern side of the island, the blessed family’s contentment was raged by evil forces. Sitheefaane opened the door of the house to see the sky for any strange signs. She noted the sheer abnormality. The tame egret they had been keeping near their shelter was also stirring, making noises. The pigeons that were residing in a cocoon fled away. The atmosphere changed dramatically. Lightning and thunder crashed into the earth. Sitheefaane entered the shelter.

She saw her adorable husband exhausted and sweating. Hasan Kalo had been inflicted with the powerful sihuru. Grief-stricken Sitheefaane and Futhu sat beside Hasan Kalo. Desperate, Sitheefaane recited grand verses of Quran and applied ground sandal powder on his face. He was trembling. Sadness conquered Sitheefaane and Futhu. However they attended to their only hope and love of their life.

Desperate and horrified Sitheefaane came out of the shelter and ran towards the area where people were living in the island. As there were few people they knew, she ran towards Mudhimbe’s house in the Dhoodigan ward. As she was dashing, her cry and helplessness was observed by the insects and animals in the darkness. She reached Mudhimbe’s household. Sobbing, she knocked at the door of his hut. Fortunately Mudhimbe opened the door and saw the helpless and saddened woman. “What happened, my dear?” Mudhimbe asked. “My husband is dying. I don’t know. Something strange has happened. Please help”, she replied. Mudhimbe and Sitheefaane ran towards the shelter. When they reached the shelter, Mudhimbe noted that the pigeon cocoon was lop-sided and the pigeons in the cocoon had fled from the vicinity.

Hasan Kalo was crying; his body was possessed by an evil spirit due to the sihuru. Mudhimbe told Sitheefaane that her husband had been inflicted by sihuru. Mudhimbe was among one of the greatest Fanditha masters in the island. Mudimbe started making a powerful fanditha to exorcise the evil spirit that had been haunting Hassan Kalo. But he had to make a fanditha before the final hours of Maa Nakaiy. He knew that it was the last night of Maa Nakaiy. Few hours were left for Mudhimbe to save Hassan Kalo. Mudhimbe came out of the shelter with Futhu, and drew an Ano, a ritual line around the shelter. He then started reciting charms and spells. Mudhimbe was trying to bring a good jinn to help him destroy the sihuru performer. Suddenly a jinn appeared in front of him. “It is a devil of the sea that is inflicting Hassan Kalo,” the jinn said. “The Sihuru performer is now in Horoadi area of the island.” The Jinn said.

Getting the advice from the jinni, Mudhimbe deiced to incinerate the Sihuru performer. But they had to get a brain coral from the shore to make a ritual against the wicked plotter. While Mudhimbe was trying to make fanditha, Ibra and his aide laughed and enjoyed their success in the darkness. Insects that saw them retrieved in fear.

Mudhimbe and Futhu ran towards the beach. They went to Dhiyarehifannu beach, and grabbed a brain coral and went near the shelter. Then the coral was kept within an Ano. The coral had to be burned to ashes by casting powerful spells. Mudhimbe started performing the ritual. Time was running out and the magnitude of the sihuru on Hassan Kalo was increasing. But the courageous Mudhimbe continued fanditha spells till the coral engulfed in fire. All of a sudden, fire engulfed the stone and it started to burn. Mudhimbe put camphor and kumunzaani to spread the power of fanditha around the area. The power of sihuru on Hassan Kalo was weakening.

Mudhimbe recited Quranic verses and fanditha spells. Suddenly an evil Jinn appeared in front of him, and warned Mudhimbe that he would not be able to destroy the man he had been trying to incinerate. But Mudhimbe continued reciting the fanditha spells and took his masdhafiyohi that was kept on his waist. He thrashed the knife into the coral. Fire exploded from the stone. An  fire engulfed the evil Jinn. Meanwhile Bondo Ibra was burned down. The power of sihuru was destroyed. Hassan Kalo was dispossessed from the evil spirit and he became normal.

Fanditha – used to bring good luck, to cure disease and to protect from evil spirits.

Sihuru – the use of supernatural powers or magic for evil and selfish purposes.

Sihuruverin – the people who perform sihuru, lived in the island.

Mudhimbe – the person who leads the prayer in the mosque.

Ano – a line drawn on the ground to carry out fandhitha practices.