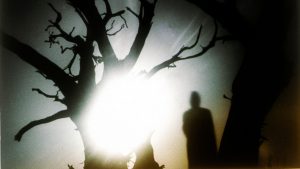 In ancient times, people used to throw away garbage or any unwanted object after saying ‘gaigaa dhuru’, to caution any supernatural beings of the object as it might hit such a spirit in the vicinity. Once there lived a happy family of Ahammadhu Kalo, a respected fisherman, in the ward of dhadimago. The family comprised of a couple and two children.

They kept a pigeon cocoon in the household. In ancient days people believed that pigeons are sacred birds which warned people of malevolent occurrences about to happen. During a season of hulhango, fishermen of the island enjoyed a great period of fishing, with huge fish catches each and every day. As a result fish wastes accumulated in households in large quantities. People threw the wastes behind their houses, into places where trees were present.

One night Ahammadhu Kalo brought loads of fish to his household. After gutting the fish, he asked his son Mohamed to throw the fish waste. Mohamed went behind the house. The tame cat that lived with the family also went with him. When Mohamed tried to throw the waste, the cat screamed. Mohamed didn’t bother. But the cat screamed again. Nevertheless, he threw the waste and entered the house.

The family enjoyed a good fish meal and they slept. At midnight, Mohamed woke up and called his mom, “Mom, I can’t sleep. I am sick.” Mohamed’s mom Aisaadhee went to attend her son. She touched his forehead; he was having fever. Aisaadhee called her husband. They applied wet cloth on his forehead and body. But the fever did not subside. Suddenly Mohamed said – “There it is. There it is. It is coming to me.” “What is it? – my son,” asked his father. “I don’t know! A black shadow! It is like a monster!” Mohamed’s parents realized that their son had been possessed. Ahammadhu Kalo took the faanooz lamp, and went out of the house. He observed that the pigeons were awake. The cat was also screaming intermittently. He went behind the house and noticed that the waste was not there.

Ahamadhu Kalo realised that an evil spirit Kirufelihooni Hussain Kaleyge had eaten up all the waste. He came to the conclusion that the spirit had been hit by the fish waste. Ahammadhu Kalo went to get a fandithaveriya. He was able to get Rekka’s help. Rekka was a famous fanditha performer. He went to the family’s household. Rekka observed Mohamed. “Kirufelihooni Hussain Kaleyge had possessed him,” said Rekka. And he went behind the house and started reciting fanditha spells.

He walked around the house while reciting fanditha spells and splashing water from the glass that he was holding. All of a sudden Kirufelihooni Hussain Kaleyge appeared behind the trees. Rekka questioned the fereytha, “Why did you inflict Mohamed?” “He hit me with fish wastes, replied Kirifelihooni Edhurukaleygefaanu. “You should not do that! He is a small boy. He was not aware of your presence,” said Rekka. “I will burn you.” “No. No. I will never do that to this family again. And I promise you I will never come to this household hereafter,” begged Kirufelihooni Hussain Kaleyge.

Soon the spirit disappeared. Rekka then entered the house and recited fanditha spells on Mohamed and splashed water on to his body. Mohamed recovered from the malevolent attack from the demon. Thereafter the family was safe from Kirufelihooni Hussain Kaleyge.

*Kirufelihooni Hussain Kaleyge- imaginary monster. The name is related to grated coconut. It is believed that this monster appears and lives in areas where wastes are dumped.