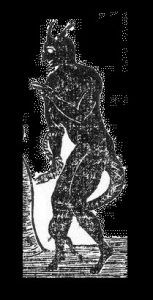 In ancient times people gather at households for performing mauloodh, recitation praising the Prophet Mohamed (SAW). One vivid Friday, after the Friday prayer, some men were invited to a house in Fuvahmulah to recite mauloodh. The people of the household invited 10 men for the recitation, to be followed by a feast. After the prayer, all men who were invited left the mosque and headed towards the house. When they reached the house, the feast was set . Various local meals were prepared.  There were 10 chairs allocated for the 10 invitees.

They sat on the chairs and started eating. But the people of the household noticed that one invitee was standing as he was deprived of a chair. A feeling of strangeness possessed the household. They counted the number of chairs in the dinning floor.

There were 10 chairs. The invitees were also surprised to see one of their companions standing behind the invitees although there were 10 chairs and 10 invitees. The Imam of the mosque who was having the feast stopped eating and stood up from his chair. He walked around the table, behind the men who were sitting. Imam’s eyes caught a tail that came out from one of the chairs of an invitee. The tail came out of the sarong of one invitee. Imam knew that it was nagooseysaru, a devil which can transform into many forms, was present with the invitees. The imam took his masdhafiyohi and shouted at nagooseysaru.

Then the devil warned the Imam not to attack him with the knife and that it will peacefully leave the feast. Nagooseysaru warned that if it was attacked it will haunt the whole island. Then the devil left the dining room and came out of the house and suddenly disappeared.

Nagooseysaru– According to “MALDIVIAN MYTHS by Hasan Ahmed Manik” he describes Nagooseysaru as below. But i have written this story in which the powerful devil in the form of a “half-human being” tried to infiltrate into a community gathering that was held in daytime.

“It is believed that this monster comes on land at night. It is in the form of a camel with a very long tail which is stiff and hard. The tail may be arched on to the head. The entire body will appear luminous in the dark. It will smell like “the wet stones of the reef”. The one who sees it may be destroyed. It will walk on four legs. The footprints will leave the mark of three spikes on the ground. It will spit fire and will have one eye only. According to some people it resembles a goat with the tail coiled. Some people also describe it as a low long animal. It is able to eat human beings alive with the bones and all. Some people think of it as an unreal being spoken of only to inflict fear into the hearts of children and robbers.”- Hasan Ahmed Manik (https://hani-amir.squarespace.com/s/Maldivian-Myths-Hasan-Ahmed-Manik.docx).