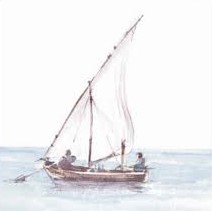 In ancient times, it was believed  that Fuvahmulah existed as two separate islands. Fishing was the backbone and livelihood of the inhabitants and people of Fuvahmulah enjoyed their living with the blessings of the vast ocean surrounding them.

One sunny day, two fishermen rowed their bokkura in to the passage of Ambul, an anchorage area in the north west of the island. They went to the beach to collect some bamboo fishing rods that they had kept on the beach. When they arrived at Ambul, an old man was sitting on a wooden log. The two fishermen gave him some of their catches and rowed out of Ambul.

He saw the two fishermen entering a household, and was surprised by a community living there. He witnessed smoke coming out of the area, as members of the community were cooking and enjoying the mid-afternoon. The old man previously thought the only community that was living in Fuvahmulah was residing where he had been living. The curious old man was happy to witness a community in his island and he rushed towards the house that the fishermen entered. He introduced himself and the community greeted him. Thereafter, the people from the old man’s community knew that there were people living in other areas of Fuvahmulah.

Fuvahmulah- is an island which lies in the Equatorial Channel

Ambul- a beach in Fuvahmulha