Kattelhi is a unique deep water fish (Promethichthys Prometheus fish) exclusively found in the sea of Fuvahmulah. They live relatively deep in the ocean. This is an imaginary story about why Kattelhi fled the reef water. 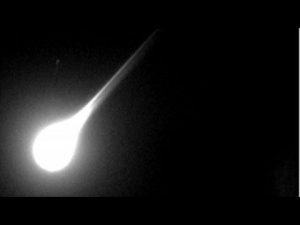 In ancient days, it was believed that Kattelhi lived on the reef of Fuvahmulah. People went to beaches and stayed on the reef in high tide to catch these fish using bait. This is a folk story of how Kattelhi fled the reef and moved into the deep sea.

On a cool and serene night Hassan Beyya and his son Ahmed went to Aruffanne beach to fish Kattelhi. When the tide was high, they started fishing. Within half an hour they caught around 20 Kattelhi. Both of them were so happy and elated about the good catch. But suddenly they saw huge fireball hovering above the ocean, not far from them. It was heading towards Aruffanne beach. Within seconds it descended to the reef water and vanished. Then a huge wave was created from where it landed. Hassan Beyya and Ahmed were puzzled. But they continued fishing kattelhi. However they could not get a catch after the fireball landed in the water.

They cast their poles several times but in vain. “My son, there is something wrong. There is no kattelhi on the reef,” said Hassan Beyya. They decided to go home. When they ascended on the beach, a huge fireball hovered in the sky. The fireball was hovering above the island. Hassan Beyya and his son were surprised to see hundreds of Kattelhi jumping out of the water, trying to escape in to the sandy beach. They also saw an unknown huge creature catching fish.

The fireball descended into the reef. Confused, they waited inside the bush. Suddenly two huge monsters appeared out of the reef water. Hassan Beyya realised that they were Eshibendi fereytha, monsters of the sea. They were hunting and eating Kattelhi on the reef water. Suddenly the two monsters started fighting each other, attacking with their beast-like hands and heads.

Frightening sounds roared across the island. Hassan Beyya and Ahmed ran towards home. They went to get help from Rekibea, a master fandithaveriya. They all ran towards Aruffanne beach. Three of them took shelter under a thick vegetation. Rekibea started reciting fanditha spells. The two monsters were attacking each other like wild lions. Some of their powerful blows hit the waters, creating huge waves. Rekibea performed a powerful fanditha and transformed them in to a huge rock. People say that the distinct coral boulder in arufanne reef is the fereytha that was destroyed by the fanditha.