Women have always had an important role in the family and community. In the early history of Maldives, Maldives witnessed woman as a Sultana or ruler. Several historians have confirmed that female rulers have reigned over the islands up until the 16th century. Ibn Batuta who came upon the women of Maldives in the 1300s saw it rather strange to find a female ruler by the name of Khadija who commanded an army of a thousand men and to find women with half of their bodies uncovered. 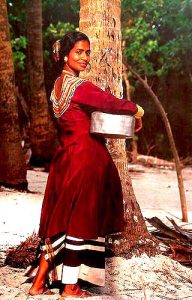 Pyrard often wrote in detail about the nature of women around him, the dynamics of the relationships they had with the world around them, and the place of these women in their society. With a sense of admiration, he wrote of the olive complexion of the women he met. If it is in the writer’s nature to admire women in general or if these women with the darkest hair of black are of the admirable kind is a question I ask. Writing about how the women washed their hair and bathed it in sweet scented oils Pyrard said,

‘It is a beauty among women to have the hair very long, thick, and black; they dress and bathe it often… they let it float in the wind until it be perfectly dry, then they apply oils, very odoriferous, in such wise that their heads are always soaked and oily.’

In Maldivian tradition, it is customary for the Maldivian women to keep their their hair wet and oily. But they also keep a ‘symbol’ on their hair – the hair bun. Hairstyle is an important part of staying in fashion. Even if you have great clothes, wrong hairstyle can ruin everything. Maldivian women kept in mind to look feminine and innocent. One of the unique things that can be seeing from them is the typical hair bun. In Fuvahmulah, we call it ‘hulhi’.