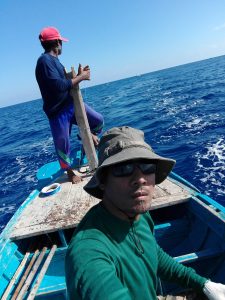 Sailing with the greatest fisherman, Ahmed Kalo, in Fuvahmulah 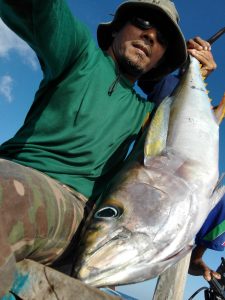 Fishing is a skill. It involves techniques and various methods. In Maldives, fishermen deploy different methods to catch the great yellowfin tuna. One of these is the method using Chad Mackerel (Rinmas or Rinmaha) to catch these species of fish.  Fuvahmulah is an island surrounded by the vast Ocean, a famous spot to yellowfin tuna.
To fish yellowfin tuna, fishermen catch Chad Macherel, mostly early in the morning.

They use small wooden rods and fish bait to catch chad mackerel. Fishing rinmaha is carried out near the island sea. Once they catch enough Chad Macherel for the day, they go back to the island and keep the bait fish in a netted cage in the harbor.
Fishermen normally set off around in the afternoon around 1:30 for fishing yellowfin tuna. They will travel around 5 or 6 kilometers off the coast of the island, and they will search for signs of sea birds. Once they observe the birds, they head towards the area where the birds are engaged in the frenzy of eating the small bait fish that are on the surface of the sea. This is a scene of utter joy and happiness for the fishermen as the hungry frenzy ascend from the deep sea. “Boa kanaalaa (there is the tuna),” fishermen will say when they see the tunas jumping out of the water. 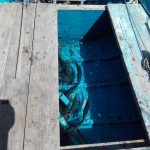 Compartment in the vessel 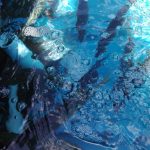 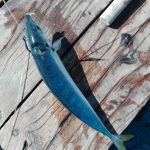 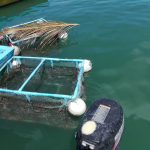 Cage in the harbor 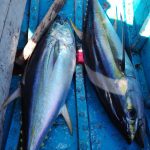 They often group together in enormous schools and can be seen breaking the surface chasing after bait. When the fishermen are near the birds, they will put live Chad Macherel on the hooks, and quickly throw away the bait fish. Sometimes the yellofin tuna jumps out of the water and storms the Chad Macherel when the bait fish lands on the surface of the water. If it is a large yellowfin tuna, the fishermen release the monofilament line to great lenghts, giving the opportunity to the predator to descend as the fish will thrash the fishermen into the sea if he aims to drag the fish.

If it is a large yellowfin tuna, then the fishermen release around 100 to 300 m of line as the predator ferociously descends with immense force. The sheer power on the line is so tremendous that the fishermen will be exhausted. Like all tuna they pull hard for their size.  They almost never jump when hooked, although I have seen them come out of the water to grab a bait or lure.  When you get them near the fishing vessel, they turn sideways and swim in large circles making it a long process to get them in the boat.  It’s virtually impossible to horse the larger ones in quickly no matter what tackle you are using.

The fishermen will pull up the creature. The heavy fish is slowly dragged towards the surface. When the yellowfin tuna ascends to the surface a person will be ready to hold “Aavani” (large hook) on the fish so that it will be easily taken into the vessel.