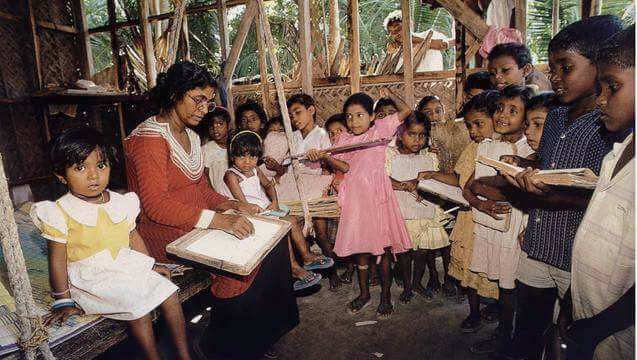 About 30 years ago, every morning I went to a house in my district to learn Quran. Children of my age group gather at the house where “Dhatha” (meaning sister) tought us how to read and learn Quran. We all sat on a cement platform built in the household next to the yam fields.

Dhatha took us versus of Quran and then we read and learned ourselves. She also took us lessons on how to read basic arabic. This was performed by writing letters on a wooden board that contained white sand. She wrote letters using ikel (iloshi). The arabic letters were engraved in the white sand on the board.

Prior to the advent of modern day pre-schools, the traditional edhuruge prevailed acrossed the islands. The house provided education by respected members in the community. It was freely provided. But a symbolic small fee is charged. People who are unable to pay had no records of debts.  Children who attended the sessions are of the age ranges between 3 and 15 years. We also assisted each other. Older children assisted the younger. Each child is assigned work according to his/her own ability.

Edhuruge helped us read the Holy Quran properly and to develop a love for the Quran and the Islamic religion. The teaching of literacy and numeracy skills is also an important component of the edhuruge.