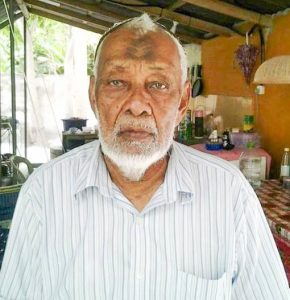 The world was armed with nuclear weapons in the 1950s. Eventhough the World War two ended, humanity was in a state of horror after the nuclear attack on Japan. Imperialism dominated the world. Disputes shattered nations and disunited people of same race and creed.

The world war with multi-faceted disputes lead to the death of millions. An island nation – Maldives- in the Indian Ocean was in a state of internal political disputes too – due to injustice and tyranny. Daring attempts to seek justice and freedom by the inhabitants of the Southern most three atolls – Addu, Huvadhoo and Fuvahmulah -sent shock waves to the central government of the Maldives. 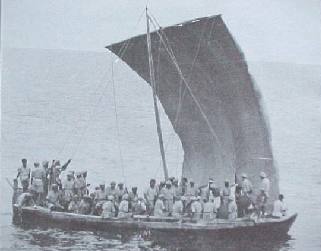 They are rejected by the Majlis, and Nasir is authorised to deal with the Southern islands. Male militia led by Nasir attacks Thinadhoo

To defy and crush the true cause of these islanders, the central government sent troops armed with weapons. However, this threat did not change the determination of the freedom fighters. And community leaders rose to the occasion. They defied against tyranny, leading the community to resist segregation. One of the daring leaders was the late Abdurahman Be of Dhiguvaandu. The commanding figure in the beautiful and enigmatic island of Fuvahmulah.

On 13th March 1959, Huvadhoo and Fuvahmulah broke away from the sovereign authority of the Sultan of the Maldives and joined Addu to form the United Suvadive Republic. The main reasons behind the great uprising and breakaway from the central government was due to lack of basic rights, basic needs, injustice and severe trade restrictions. The central government could not tolerate this move. And it decided to crush the movement and true cause of it.

After declaring independence and ceding to Addu, the people of the three atolls were living a normal life. 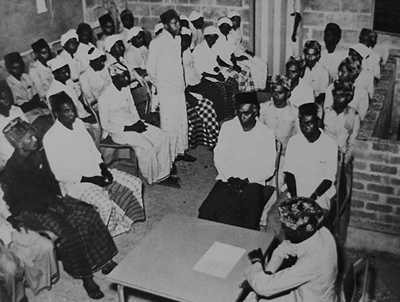 The Parliament of the Suvadives in full session at Maaranga in Gan, Addu Atoll. The uprising was very popular in the southern three atolls.

It was a customary day for the people of Fuvahmulah. At around 2pm, a young man broke the silence of this isolated island. He came running through the narrow roads and pathways of Dhiguvaandu district. He stopped at Veyregamige household of Dhiguvaanu ward. He shouted at Abdurahman be who was in a yam field near that house. “Abdurahmanbe, Abdurahman be! There is a boat from Male. They are armed.”

It was a boat deployed from Male’ – an attempt to land Maldivian government officials on Fuvahmulah.

After hearing the news, Abrurahmanbe who was cutting yams kept his knives on feeshigando (land mass in yam fields) and ran towards Anbul, an anchorage area in hoadhadu district. While rushing towards the beach, he informed the nobles and other community members in Dhiguvaandu and Hoadhadu. People followed Abdurahmanbe.

When they reached anbul, a boat was offshore of the island. “Collect hathaa-rocks,” Abdurahmanbe commanded. Everyone on the beach collected rocks to throw at the enemy. And they threw the rocks as far as they could. The islanders confronted forces sent from Male’ with sticks and stones when they tried to come ashore.

All of a sudden, gunshots roared the island. The soldiers in the boat were firing at the island. “Throw.” Abdurahmanbe and noblemen backed the united and fearless crowd to throw the rocks. People threw the rocks at the enemy and it was like rain showers coming from the sky. Abdurahmanbe and nobles in the island had made sandbanks around the anchorage area to hinder the central government forces from attempting to invade the island. The sand banks prevented the rifle fire from being more effective.

The batheli (small vessel) which was accompanying the mother ship tried to navigate towards the island. But it could not get into the reef flat to reach the island. It was low tide. The vessel was swinging at the edge of the reef crest. People caught a transitory view of batheli that was stuck at the reef edge and they stormed the batheli with rocks. Soldiers in the batheli tried to aim the guns at the crowd. But fortunately they could not aim due to tripping and waviness of the vessel.

During the islander’s assault, Abdurahmanbe saw a man named Dheylige Mohamed Manik, who was lying on the ground. “I thought he was hiding to protect from gun shots fired from the boat. But there was pool of blood beneath his body. Then I noticed that a bullet had hit his forehead.” Abdurahmanbe described the incident of the first causality during the attack by the enemy forces.

The brutal armed attack on one of their island warriors ignited the attack more aggressively. The united people defied with sheer courage. Abdurahmanbe and the nobles on the beach ordered to knot the batheli using a rodho- a strong rope used to fish predator fish, such as sharks, wahoo etc. A group of people ran down the fore reef to execute this operation to pull the vessel and to apprehend the soldiers. Unfortunately, the soldiers on the batheli managed to escape from the dreadful trap at the reef crest. The natural reef formation around Fuvahmulah is mysterious and really dangerous. The island is pounded continuously by huge waves at high tide. The natural phenomena was a fearful terrain for the enemy forces. And it made them to leave the island.

Then after firing few shots at the island, including Maa Miski (a mosque near the beach), the boat and the batheli went away. The enemy headed towards the fishermen who were fishing around the Raazuva Faru (famous log reef around Fuvahmulah). But knowing the enemies would approach them, the lionhearted fishermen rowed their bokkuras through Raazuva Faru and got into the beach of Dhoodigan. The enemies were not able to get them. And then the enemy vessels departed.

This is one incident Abdurahmanbe was involved actively during the great uprising of the southern three atolls. There are numerous incidents. In one incident, he led the islanders to arrest the soldiers in Fuvahmulah. The islanders arrested the soldiers and sent them to Addu. The they  took control of Fuvahmulah. My cousin Ismail Rafeeq through a website will bring more accounts of these incidents. I thought of writing this article in the memory of late Abdurahmanbe. I was able to write this article with the help of an interview of Abdurahmanbe that I took in 2016 on request from my cousin Ismail Rafeeq for one of his social projects. Abdurahmanbe left legacy of courage and bravery. He was a religious, friendly and kind human being. May Allah bless his soul.