The Republic of Maldives is an extensive group of islands consisting of twenty-six coral atolls, in the northern Indian Ocean. The chain of islands extends more than 800 kilometers. The Maldives is famous for its exquisite beauty – turquoise sea, blue lagoons and stunning underwater world. And interestingly, the population is just 500,000 people. Matching the distinctive features of Maldives, its people are also unique. 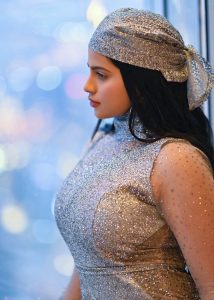 anka, India, Arab countries, and Africa. Maldivian people are charismatic, friendly and eloquent. There is also uniqueness in the appearance of women. They are exotic, earthy and charming. Perhaps they remain an icon of the islands’ identity.

Ladies and gentlemen, I am going to write about Kaizeen, the most famous model in the Maldives. She is a well-known face of Maldives’ glamour world. The model hails from the island of Naifaru. She turns everyone’s heads towards her with her beautiful face and figure.

The cabin crew turned model has beautiful hair, eyes, flawless skin, elegance and everything essential in a model. She has done modelling – flaunting her gorgeous hair and fabulous sense of carrying them out with grace. Kaizeen’s go-to hairstyle is appealing. It is naturally thick, straight and voluminous. 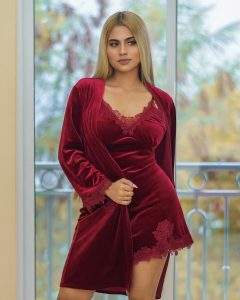 Kaizeen’s Instagram account is filled with pictures of her, which leaves her fans wondering about her beauty secret.

The famous traveler Francois Pyrard described Maldivian women, “It is a beauty among women to have the hair very long, thick, and black; they dress and bathe it often…they let it float in the wind until it be perfectly dry, then they apply oils, very odoriferous, in such wise that their heads are always soaked and oily.” He also described their hair and olive complexion. These descriptions were what the travelers had witnessed well over 300 years ago.

Food in daily life was poor. Rice and fish are the staple foods. Fish is the most important source of protein in the average diet. Very few vegetables are eaten. Betel leaf with arecanut, cloves, and lime, known as foh, is chewed after meals. People smoke goodgooda (hooker). Even these basic food is not sufficient for a healthy diet unlike the abundance of vegetables, fruits and other food items available in the neighboring countries where the models and act 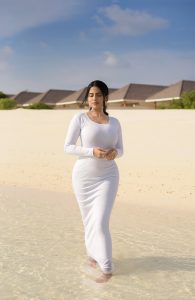 resses eat them in abundance.

Some people say, “you are what you eat” but that does not hold the truth. Perhaps, it is not the food that inherited us with the distinct physical appearances. But Kaizeen also has a set of rules to maintain her appearance and to keep her in good health as what the famous models and actresses follow. She carries out workouts and eats a healthy and well-balanced diet. Evidently, a little exercise clubbed with healthy food is the best recipe for maintaining a healthy and glowing skin.

If Uruvashi Rautela comes from the Himalayas, then Kaizeen comes from a tiny island of the Maldives. They are gifted with naturally good skin. It is not ‘magic’ that has turned them stunning and undeniable beauty queens. Kaizeen remains an evergreen and eternal figure of feminine beauty, and will remain so for times to come. Kaizeen is a name that has become synonymous with the epitome of female beauty.